Sidelights on the Camembert History

The good reputation of the camembert soon drew the world attention on that cheese. Therefore many anecdotes about the camembert have been collected over the years and complete amusingly its history. Even more, the camembert has got many fans (some collect the original labels). It has also been often associated with the beret, the bread ... as one of the supposed symbols of the French people.

Many anecdotes and facts that should be explained now...

The official Camembert history as it is presented on the first page of this site, could seem a little extraordinary. Nevertheless there are other short stories in the long camembert history, that would seem even more incredible. Here are a few of them.

From time to time, the part of Marie Harel in the creation of the Camembert is contested, but history will have to keep her name, as long as nobody can find a more accurate one.

Nevertheless, she is not only associated with the history of Camembert for its personal part. One of her descendants, Thomas Paynel, had also his "fifteen minutes of fame". In august 1863 he met Napoleon III in Surdon and offered him one of his cheese. Napoleon III was delighted with the taste of the cheese, and Thomas Paynel became the official furnisher of camembert of the french emperor. It helps him to create a new outlet for the camembert in Paris.

Thanks also to Victor Paynel, the Camembert also became in 1813 "citizen of the town of Caen"!

The camembert cheese met history one more time during World War I (1914-18). It was one of the components of the iron rations, that were given to the French soldiers. They also created an expression to define the behavior of the unexploded shells, they said that they "made a balls-up in Camembert" (in french "foirer dans le camembert") 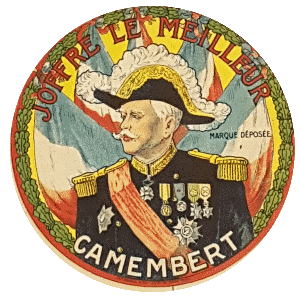 At the eve of the 20th century, in 1926 an American citizen, Joseph Knirim went to Normandy and there, claimed that the camembert had cured him from his stomachaches. For this reason, he decided to pay homage to the camembert birthplace and started a fund for the erection of a statue. Thanks to his help, a Marie Harel's statue was erected in Vimoutiers and inaugurated by Mr Millerand..

But the stories went on... The statue was bombed down during the allies landings in Normandy in 1944. At the end of the war, a fund was started in the USA to rebuild the statue. A lot of Americans and especially the workers of the Borden's Cheese Company (Ohio) made an handsome contribution and soon the new statue was inaugurated.

The camembert and its box

Although the camembert taste is probably the main reason of its international celebrity, one must admit that the camembert box and its famous label also plays a major role in its success.

In the early days, the camemberts were sold (as many other cheeses) laid in straw cases on the market of the Auge country. Nevertheless soon it appeared that it didn't allow the camembert to be sold far from its dairy . Other solutions had to be found...

First the producers decided to wrap every camembert in a thin paper sheet, then to pile five of them up in a strong red sheet of paper ( with the brand of the camembert printed on it) and on both sides of the pile they added two hexagonal wood pieces. That solution was good enought to carry the camemberts into the different Norman markets, but it was still unefficient for long transports.

In the town of "Le Havre" around 1890, a french cheese exporter (M. Rousset) decided to use spruce wood boxes already used in the Jura (a low chain of mountains in the east of France) to export its camemberts. In the same time, Eugène Ridel, who was said to be the inventor of the camembert box in the first page of this site, worked on the creation of a "nailed and stapled" poplar wood box. He probably shared that paternity with Georges Leroy, the owner of a sawmill that became one of the biggest in Normandy for the production of "camembert boxes". 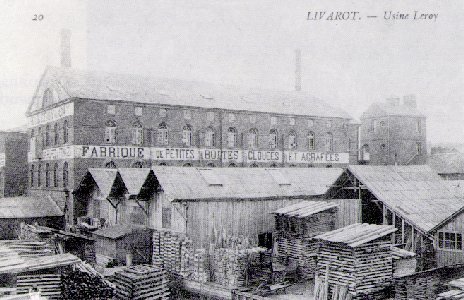 The success came soon and it seems that at the beginning of the 20th century the use of that box was generalized. We should note that during that period the tin box was also used to wrap the camemberts that were sent in Great Britain. The "invention" of the camembert label closely followed the generalization of the used of the camembert box. It was prefered to other technologies, such as printing on wood, and the poker work.

In a country, where it is often as important to speak about the cook than to really eat it; the camembert is bound to become the subject or one of the elements of many books, paintings etc...

Emile Zola described in 1873 one of the Paris cheese market in "Le ventre de Paris":

Pierre Chaine in "Mémoires d'un rat" (Memory of a rat) describes the life of the rat during the first world war. The hero, a rat called Ferdinand, became the mascot of the soldiers that offered it what every soldier would like to get:

Clémenceau, " the Tiger", confirmed that opinion. When talking to the ex-servicemen of the "cote 504" in 1919 (a battlefield of World War I), he described the camembert as:

In 1919 Clémenceau, " the Tiger", talking to the ex-servicemen of the "cote 504" (a battlefield of World War I), described the camembert as:

Franck Nohain created that famous quatrain, loved by the children:

Marcel Proust , who is famous for his "madeleine", explained in "Sodome et Gomorrhe II, II" the mistake of a lift attendant by the camembert fame...

Céline in one of his books "Mort à crédit" related how Gorloge (one of his character) left his familly to go to the army, and obviously in his haversack he put some camembert cheeses

In one of the Frédéric Dard (alias San-Antonio) book "Bérurier au sérail "(Bérurier in the seraglio) published in 1969, the eccentric Bérurier, became a zealous upholder of the camembert cheese in the middle of the desert (!):

For example a least two bands have names related to the camembert. "Citizen Camembert" plays music on traditional instruments and "Monsieur Camembert" is an australian band that plays music inspired by the gypsy, jazz and classical music.

The camembert is obviously also evoked in the counting ryhme sung by the chidren (for example the one written by Henri Dès "j'attends maman, j'attends papa"), and rather obscure songs such as the "camembert dance" ("La danse du camembert") by Big Mamma. In terms of rock music the album "Camembert électrique" was published in 1969 by Gong. That album also inspired the title of the Five Fifteen album: "Six dimensions of the electric camembert".

Finally, the camembert is evoked in several other songs:

Boris Vian, in the song "J'suis snob" (I'm snob), pretend that the snobs have a curious way of eating camembert cheese.

In 1930, "You're the top", a famous Cole Porter song evokes the camembert in its fourth chorus

Camembert and the fine arts.

Salvador Dali gave to the camembert an architectural dimension:

Dali also explained in "Secret life" that he had the idea of the soft watches, that appear in the the famous "Persistence of memory", after having eaten a camembert cheese for dinner.

Cartoonists were also inspired by that cheese. Georges Colomb (alias Christophe), one of the father of the French comics, created at the beginning of the 20th century, the Sapeur Camember(t) character. The parodic character SuperDupont, created by Gotlib goes further, and uses a lot of camemberts (generally as a weapon!). Lately Frank Margerin's character, Ricky, visited the United States and brought with him a camembert. The famous character, Achille Talon, has a neighbour, Lefuneste, who collects the Californian camembert cheese label... Notice that Achille Talon's father gives that piece of advice to Lefuneste "[...] obviously never eat californian camembert cheeses"!

Finally during the 80s, Joël Hubaut and more than forty other artists founded a group called "Les enfants du Camembert" (The children of the camembert). Their works were inspired by the Normandy and were often related to the Camembert cheese (like for example the ones presented in Hubaut's showing "Pyramide-camembert-rock & roll").

Every year on Easter Tuesday since 1934, a cycle race, Paris-Camembert, takes place between Magnanville and Vimoutiers (approximately 200km).

We can also evoke the "camembert throwing", a "sport" that was also created by Joël Hubaut. The record is nowadays above 40 meters.

• History • The camembert since 1945 • Sidelights on the Camembert History